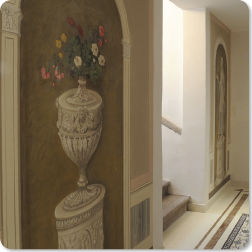 Villa Carpenada was built in the second half of the 17th century (probably in 1675) as the summer residence of bishop Giulio Berlendis, who wanted to enjoy the quiet and cool climate of the region during his holidays. Berlendis was born in Alzano Lombardo in 1626, and was ordained priest in Bergamo; his being famous in the area is linked to the many works of art he donated to the churches around Belluno, like the bronze doors of the city's cathedral. In 1653 he became part of the Venetian Church, and was consecrated bishop of the curia of Belluno and Feltre seventeen years later; he held this position until his death in 1693.

In the 18th and the 19th centuries the villa changed many owners, all members of the aristocracy. During World War II the German army confiscated it and turned it into a barrack for the parachute regiments who fought in the battle of Monte Cassino; fortunately enough, the villa was never bombed, thus leaving its main features intact. In 1945 the villa became property of the Venetian Church and was turned into a holiday camp for the citizens of San Donà di Piave: this was the hardest time for the property and many of its frescoes were lost, since no maintenance was carried out during this period. Notwithstanding this huge loss, the villa's wide halls, the beauty of its interiors and the wide park make it the ideal place for any kind of events, wedding banquets, conventions, business lunches or dinners and many others.

During the years Villa Carpenada has hosted many politicians and heads of State, among which the former President of the Italian Republic Sandro Pertini, Pope Giovanni Paolo II and Pope Benedetto XVI, who was then a cardinal. Other prestigious guests include journalists, sportsmen, politicians, singers and showmen: among them Enzo Biagi, Gianni Morandi, Gino Bramieri, Vittorio Gassmann, Beppe Grillo, Zucchero Fornaciari, Fiorella Mannoia, Klaus Di Biasi, Felice Gimondi and Sandro Mazzola.

In 1961 Villa Carpenada became a prestigious hotel with a restaurant renowned for its game dishes, and is the most appreciated hotel in Belluno still today: many couples remember their wedding banquet in the villa's restaurant and the beautiful photos taken in the park. The construction has been built in the 17th century style: the entrance of the inner garden has a beautiful patio made of stones concrete blocks with two staircases and is surrounded by a wrought iron menagerie with statues and chapiters. From the dominating position of the garden the guests can enjoy an unparalleled view on the valley and its mountains.